The Best Award-Winning Movies You Can Watch At Home Cheaply

Movie awards season is well and truly upon us. The Golden Globes, BAFTAs and the much-coveted Oscars all took place in the last few weeks, honouring the best and brightest of the international film  industry. But, with most of 2018’s award-winning movies still in the cinema or yet to be released, how can you watch the best that Hollywood has to offer, without blowing your budget on what can expensive outings to the cinema. We’ve gathered some of the most memorable winners of the Best Picture accolade from years gone by. The best bit? With the various movie subscriptions available out there, you can watch them all easily and cheaply! 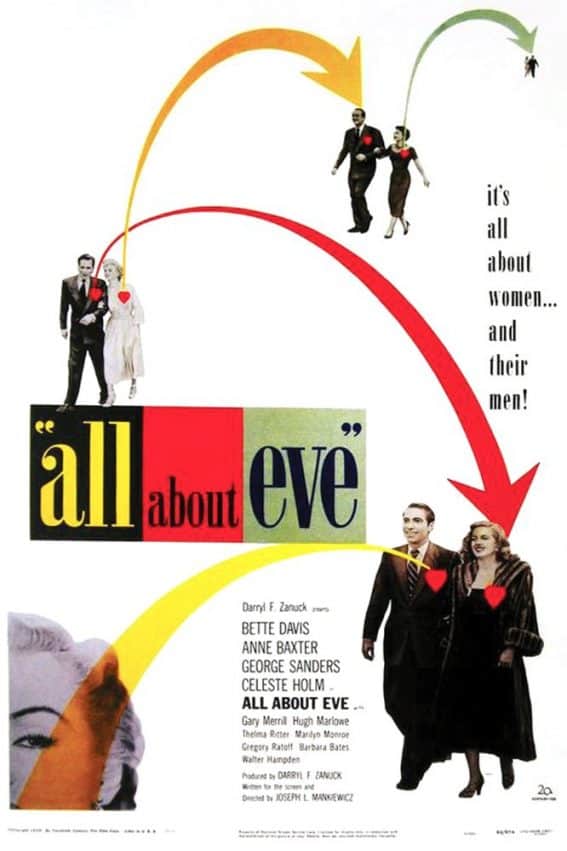 All About Eve comes straight from the golden age of Hollywood and stars Bette Davis as established, but ageing Broadway star Margo Channing. The award-winning movie tells the story of how Eve Harrington (played by Anne Baxter), an fan apparently besotted with Channing, insinuates herself into Channing’s life and threatens both her career and her relationships.

The film was ground-breaking, receiving four nominations at the Oscars for female acting. As well as Best Picture, it scooped up a further five Academy Awards. It also stole the show at the BAFTAS, The Golden Globes and the Cannes Film Festival that year, winning Best Film from any Source, Best Screenplay – Motion Picture and Best Actress for Bette Davies, respectively. 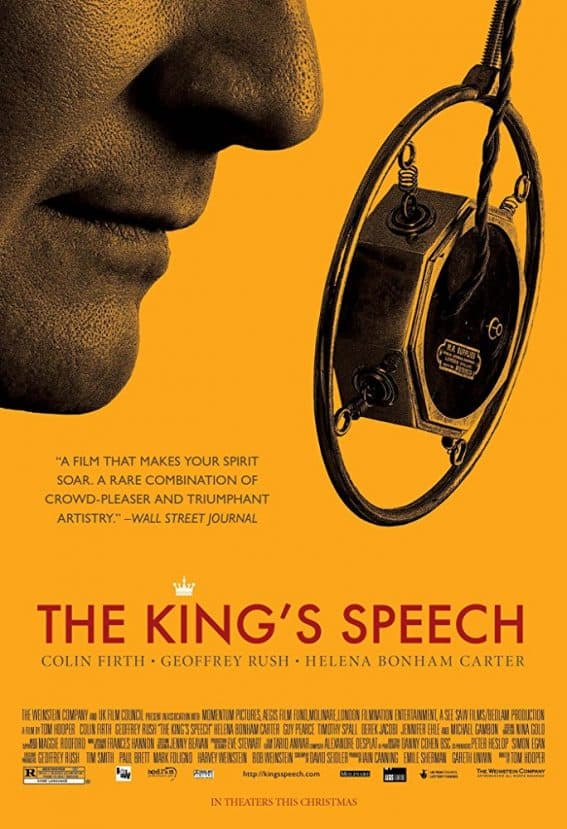 The King’s Speech is a prime example of triumph in the face of adversity. Colin Firth plays the future King George VI as Lionel Logue (Geoffrey Rush) to helps him overcome a speech impediment. After King Edward VIII abdicates the throne, the new king relies on Logue’s help. This culminates in the radio broadcast in which the King announced that Britain had declared war on Germany in 1939.

Colin Firth won the awards for Best Actor at the Academy Awards, the BAFTAs, the Golden Globes and the Screen Actors Guild Awards in 2010. The King’s Speech also won the Oscars for Best Director and Best Original Screenplay, and took home seven BAFTAs including Firth’s Best Actor win. 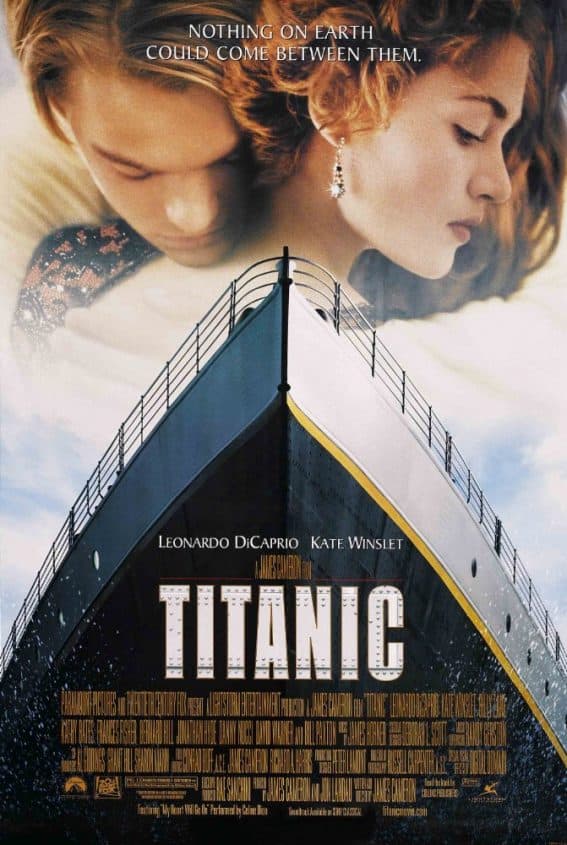 The story of the ill-fated Titanic has captured imaginations throughout history, and it seems James Cameron was no exception. It was his fascination with shipwrecks that led to him making Titanic. The romance-disaster film tells a fictionalised account of the demise of the “unsinkable ship”. It focuses on the romance between two passengers from different social classes who fall in love during Titanic’s maiden voyage. Leonardo DiCaprio and Kate Winslet starred as Jack Dawson and Rose Dewitt Bukater, roles that propelled them to international stardom.

With a production budget of $200m, Titanic was the most expensive movie ever made at the time of its release. Fortunately, the investment paid off, as the film was an enormous success. It won 11 of the 14 Oscars it was nominated for, including Best Director for James Cameron. Titanic took home four Golden Globes, too. Its theme tune, My Heart Will Go On, also collected several Best Original Song awards over the course of 1997. 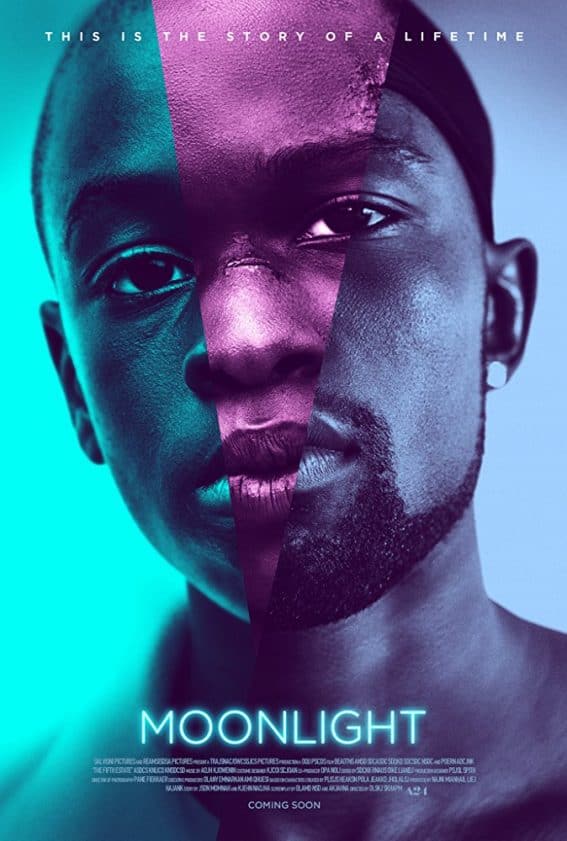 From the golden age to coming of age, Moonlight tells the story of Chiron, played by Trevante Rhodes, in three stages of his life. The film deals with various important and often difficult issues many of us face, from questions around our own identities to abuse in its various forms.

Moonlight’s winning of Best Picture at the 2016 Oscars was overshadowed by controversy when rival La La Land was initially announced as the winner. It turned out that the presenters had accidentally been given a duplicate of the envelope announcing the Best Actress, and the mistake was eventually corrected by La La Land producer Jordan Horowitz. Despite that, Moonlight scooped a further two awards at the Oscars that year, for Best Supporting Actor, and Best Adapted Screenplay. It also picked up the award for Best Motion Picture – Drama at the Golden Globes. 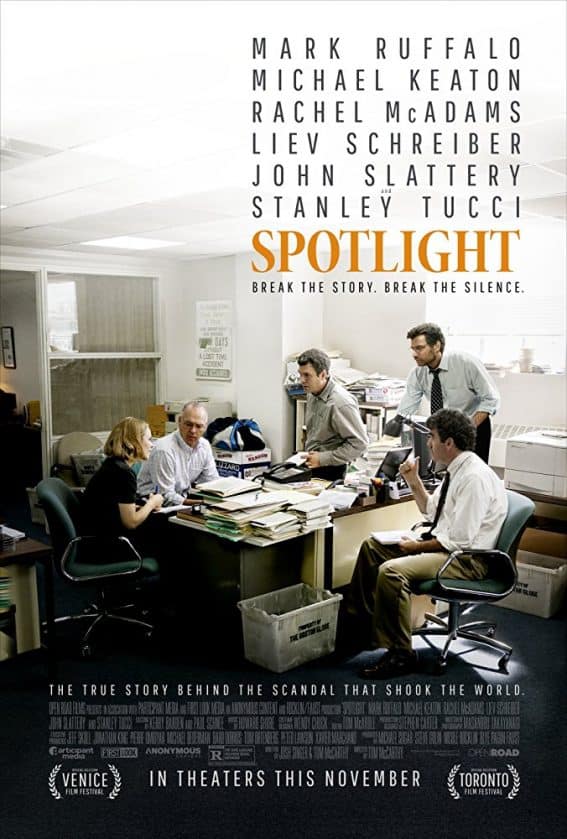 The star-studded Spotlight picked up the Oscar for Best Picture in 2015 for its dramatic re-telling of the Boston Globe’s investigation into widespread and systemic child abuse by priests in the Boston area. The investigation earned The Globe the 2003 Pullitzer Prize for Public Service, so it was an award-winning story even before it was adapted for film.

Starring Michael Keaton, Rachel McAdams and Mark Ruffalo, Spotlight was critically acclaimed. It’s been included in a number of critics’ lists of the top 10 films of 2015, and received over 100 award nominations. As well as Best Picture, it also won the Oscar for Best Original Screenplay. And, it picked up a host of wins at the New York and Los Angeles Film Critics Circles. A worthwhile and thought-provoking watch. 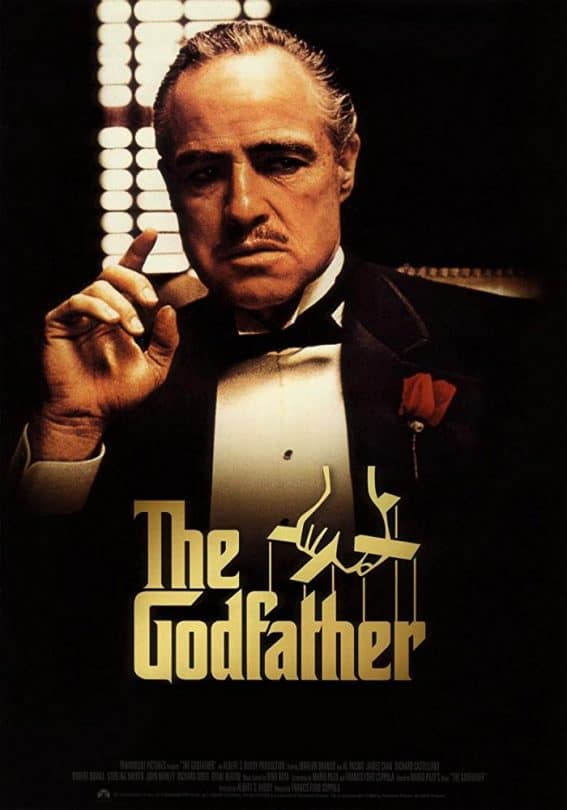 The Godfather is a rite of passage as far as films go, and it’s almost criminal not to have seen it. The Godfather’s story chronicles 10 years of the family’s lives under patriarch Vito Corleone (played by Marlon Brando), focusing on the transformation of his son, Michael (Al Pacino) from family outsider to mafia boss.

The Godfather is widely thought of as one of the greatest movies all time, particularly of gangster movies. So, it’s no surprise that it swept up at the awards the year it was released. As well as its Best Picture Oscar, the film also picked up the Oscar for Best Adapted Screenplay, and won Marlon Brando the Best Actor award. It also took home 5 Golden Globes.

Where to watch: NowTV Movie Pass

The Hurt Locker went into the record books for all the right reasons when it won Best Picture at the 2009 Oscars. Its win made it the first Best Picture winner by a female director – staggering that this took until 2009, right? Written by Mark Boal, the film follows an Explosive Ordnance Disposal team through the Iraq War. Boal drew on his own experience as a journalist embedded with troops during the war when writing the film. The film focuses on the psychological impact of the stress of combat. Some find it addictive, while others simply cannot tolerate the stress. 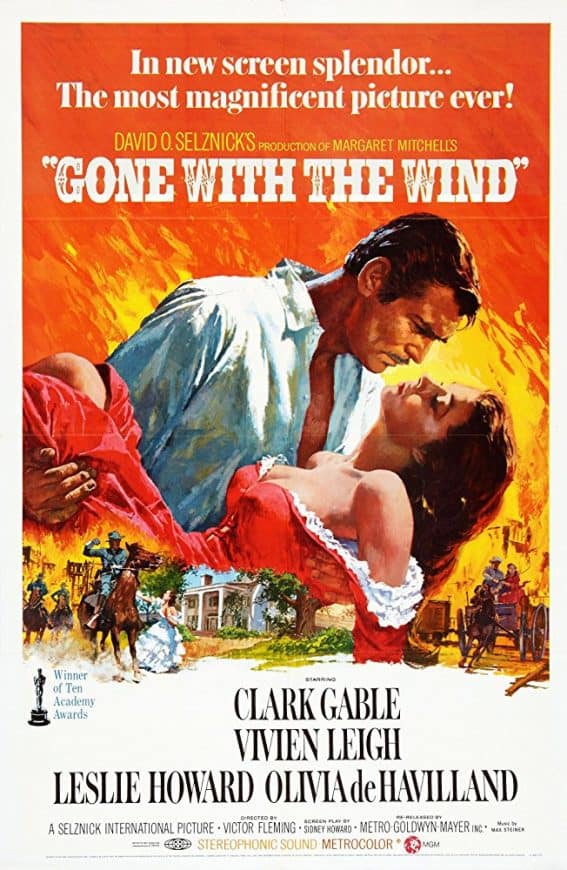 It’s an oldie but a goodie – Gone With The Wind is the oldest film on our list. Set against the backdrop of the American Civil War, Gone With The Wind tells the story of Scarlett O’Hara, a wealthy plantation owner’s daughter, and her quest to find love, and to keep her family’s plantation alive. Vivien Leigh starred in the iconic role of Scarlett, with Clark Gable opposite her as Rhett Butler.

At the time, Gone With The Wind set the record for the largest number of Academy Award nominations and wins. It scooped up eight of the thirteen Oscars it was nominated for. It was the first colour film to win Best Picture, and also secured a Best Actress award for Vivien Leigh. Unfortunately for him, Clark Gable missed out on the Best Actor award, which went to Spencer Tracy for his role in Boys Town. 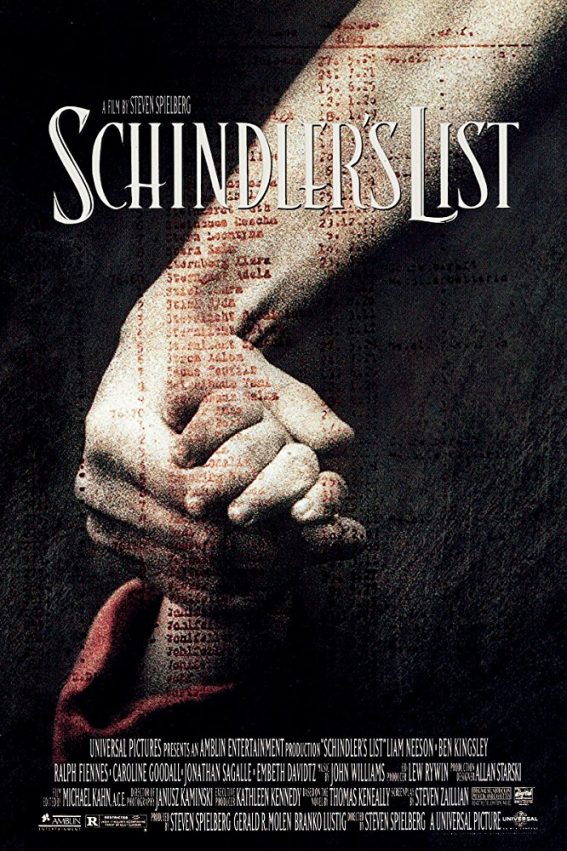 Schindler’s List was awarded a whopping seven Oscars, seven BAFTAs and three Golden Globes in 1993, and for good reason. The exceptionally moving film is retells a period in the life of German businessman and Nazi party member, Oskar Schindler. Schindler saved the lives of more than 1000 Polish-Jewish refugees during the Holocaust by employing them in his factory. The film was famously shot in black and white. The only colour used was to place emphasis on the little girl in the red coat and the issues she represents. Director Stephen Spielberg later said that his use of black and white in Schindler’s List came to represent the Holocaust itself for him.

Where to watch: Netflix or NowTV Movie Pass 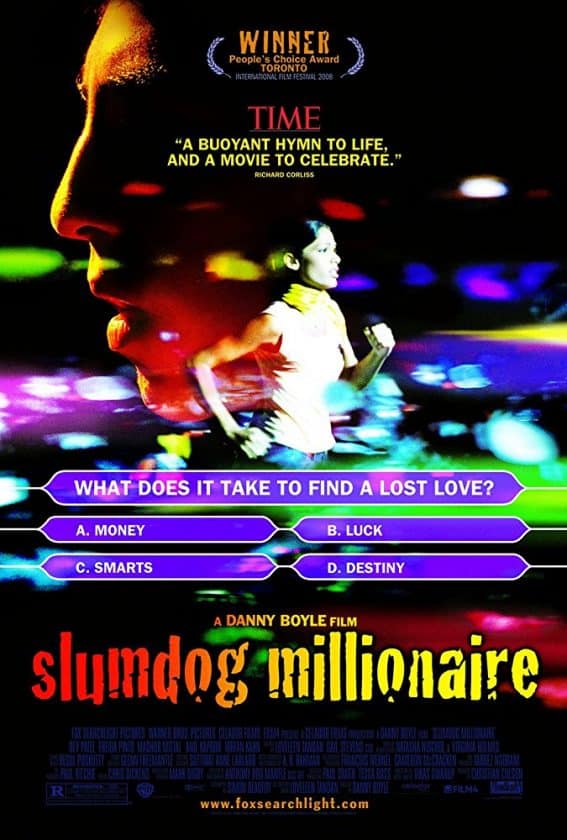 Loosely based on the novel Q&A by Indian author and diplomat Vikas Swarup, Slumdog Millionaire tells the story of a teenager, Jamal from the slums of Mumbai, and his success on the Indian version of Who Wants to Be a Millionaire? Jamal is able to answer every question he’s faced on the show correctly. Due to his background, he is accused of cheating. In the film, Jamal recounts his history, explaining how and why he was able to answer each question.

The film won eight of the ten Oscars it was nominated for. Danny Boyle won Best Director, and the movie also won Best Adapted Screenplay. It also picked up a whopping seven BAFTAs, five Critics’ Choice Awards, and four Golden Globes. Slumdog Millionaire was the most successful British film of the noughties.

What Happens To Your Brain When You Smile?