The Tipping Point For Asking For Help With Money

Asking for help can be tricky, especially when money is concerned. For some, it’s a matter of pride, and for others it’s something that, despite our willingness to be open in other areas in life, we feel oddly private about. So how does the UK stack up when it comes to honesty about our finances, and when we’ll ask for help with money?

Our recent study shows that as a nation, we’re pretty open to asking for help with money when we need it. Just 17% of UK adults in relationships say they’re unaware of the extent of their partner’s debts, and it’s great to see that most of us have someone we can trust to help in our lives.

The older you get, however, the more secretive it appears people are likely to be.

On average, it takes £4,618 of debt to make a UK adult ‘fess up and ask for help. This figure climbs to £6,441 for the over-55s, and drops to £2,936 for 18-34 year olds. Can you chalk this up to life experience? Possibly. It seems reasonable that younger adults would turn to loved ones for help earlier on, whether by dint of simply having less years on the planet to learn how to manage a tricky financial situation, or a preparedness to ask for help that fades with age.

The older generation (over-55s) are twice as likely to hide how much money they owe as adults in the 18-34 years old bracket. They also claim to argue much less than others about money, with 73% saying they never disagree with their partner about financial issues, vs 39% of under-35s. Do they take an attitude of “ignorance is bliss”, perhaps?

Marital and residential status play a part in how open people are about asking for help with money, too. Cohabiting, unmarried couples appear to have a much higher threshold than other groups at £6,017. This is 50% higher than couples who have tied the knot (£4,146).

Perhaps surprisingly, not living with your partner seems to breed more honesty than cohabitation, with lovebirds who live separately asking for help with money when they’ve amassed £3,933 in debt. But the less committed life doesn’t mean total openness; of the groups our study identified, singletons have the second highest threshold for talking about their financial situations at just under £5,500. 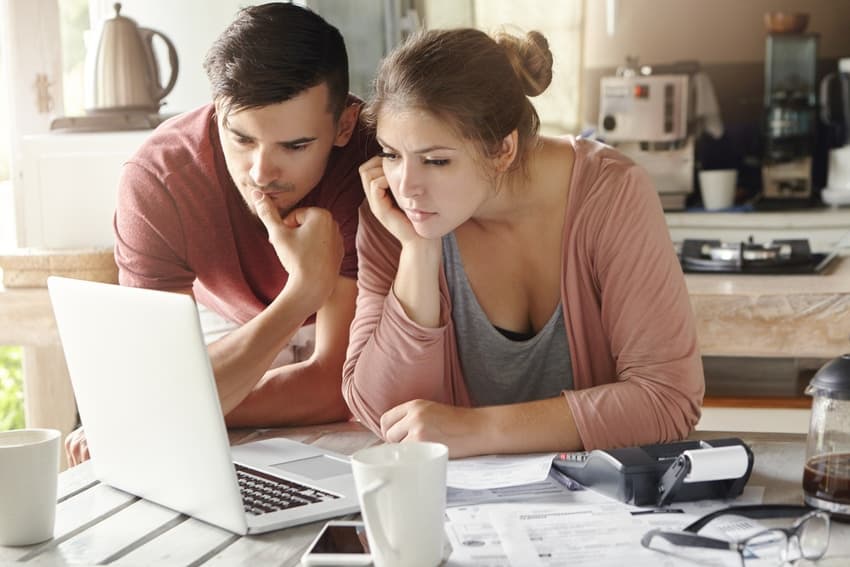 Reluctance to be open and honest about your finances, unsurprisingly, comes with a tendency to be less than honest about other things, too. People who owe money that their partners don’t know about are more likely to lie about where they are when they’re not at work, as well as how much they spend on clothes and socialising. Strangely, they tend to be quite open about the money they spend on gadgets, though!

Be Honest When You Need Help With Money

It’s an age-old saying, but it’s true: honesty really is the best policy, especially when it comes to matters of the wallet. Hiding secret debt can not only damage your individual financial wellbeing, but it can have an impact on your personal relationships, too. Sure, money can be an uncomfortable topic to approach, even with people you trust with your life. However, keeping a financial issue a secret now to avoid bickering could lead to a bigger, worse argument further down the line.

If you don’t feel comfortable approaching your loved ones for help, but still think you need help getting on top of your financial situation, then you’re not alone. There are plenty of specialist organisations out there that can help. Check out the Money Helper and their free budget planning tool. You can even get personalised analysis of your spending, and tips to help you plan your spending more effectively.

Debt not secured by underlying asset. Unsecured debt includes credit card and overdraft debt, store cards, personal loans, but excludes student debt and mortgages. A mortgage is debt secured against the value of a house

Revive Your Love Of 90s Tamagotchis With This Free App