Unusual Meals You Can Make With These Every Day Ingredients

Do you ever get bored of the same everyday ways of cooking the same everyday ingredients to make sure you stick to your budget? Us too. So, we’ve been looking for unusual meals you can make from your everyday staples, that won’t break the bank. From savory ingredients in sweet dishes to combinations you never would have thought worked, we’ve found some of the most unusual meals – and trust us, some of them are really off the wall – that you can make with everyday ingredients. Added bonus: the main ingredients in each dish are in season in June, so they’ll be even more budget-friendly to buy. Time to get cooking! 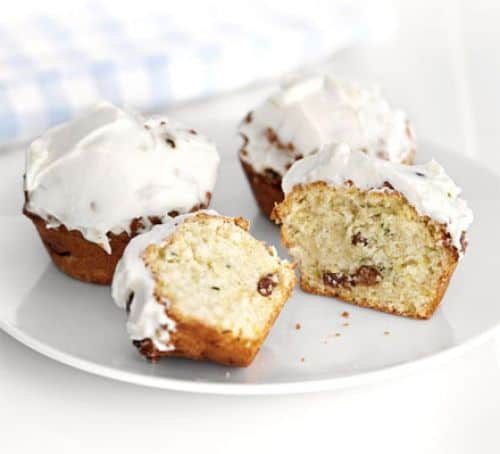 Courgettes are savory. They’re a great side vegetable, delicious in courgette fritters, and even work spiralised as an alternative to pasta. But in muffins? With icing on the top? It sounds like it shouldn’t work, but it does. Courgettes have a fairly neutral flavour that’s easily hidden in a sweet muffin, so they give this unusual meal a delightful squishy moistness. And nobody likes a dry, crumbly muffin. This recipe is a great one to do with kids a sneaky way to get more fruit and veg in!

50g courgettes, cut into chunks (no need to peel)

1 orange, cut in half

1/2 a teaspoon of baking powder

1/2 a teaspoon of cinnamon

A handful of sultanas

How to make it:

Grab a muffin tin, and brush each of the cups with oil. If you have it, you could spray the tin with a cooking oil spray as a simple solution.

Grate the courgettes and pop them into a large mixing bowl. Do the same with the apple (grate it), and add it to the courgettes. Squeeze the orange so the juice goes into the mixture, then discard the rest of the fruit.

Break the egg into the bowl, being careful to avoid getting any shell in there. Add the melted butter, and stir into the courgette and apple mixture.

Sieve the flour, baking powder and cinnamon into the bowl and mix together. Add the sugar and sultanas and give it another good mix – it doesn’t matter if the mixture is a bit lumpy.

Spoon the mixture evenly between the cups of your muffin tin, then bake for 20-25 minutes.

When they’re ready, take them out and leave them to cool in the tin. You can prepare the icing while you wait. Then, spread a blob of icing over each muffin. Delicious. 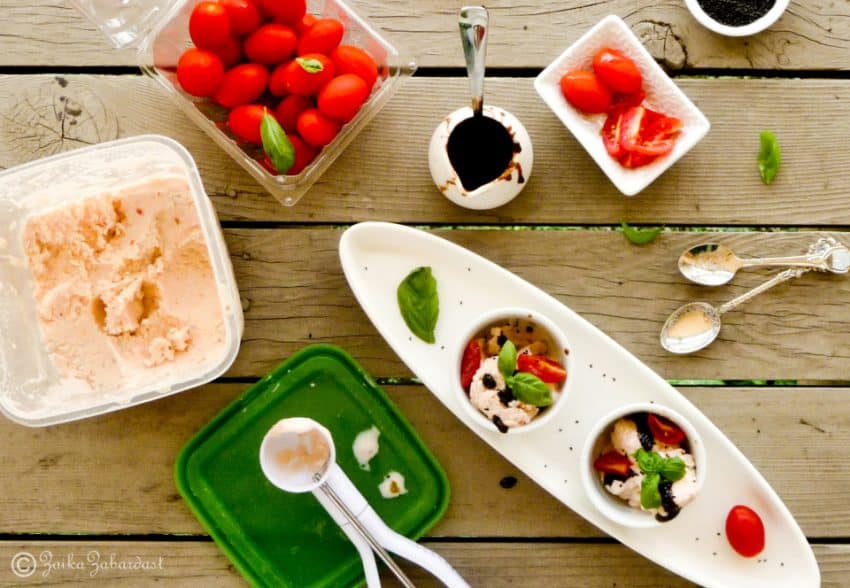 When we first saw this recipe, our reaction was something akin to this:

But, it works in a way you just wouldn’t expect savory ingredients in an ice cream to. One major perk of this unusual meal is that the recipe doesn’t use any eggs, an ingredient which often puts people off making their own ice cream. Milk and ricotta cheese give this unconventional dessert all the creaminess you’d expect of an ice cream, combined with the classic flavour combo of tomato and basil. Why not give it a whirl?

2 tablespoons of balsamic vinegar – we recommend investing in a good one if you can. It makes the world of difference to the flavour!

Cut each of the tomatoes in half and toss them in the balsamic vinegar. Arrange them, cut side up, on a baking sheet. Sprinkle with a pinch of salt and pop in the oven to roast for 30 minutes.

While your tomatoes are roasting, you can prepare your ice cream base.

In a small bowl, mix the cornflour with about 30ml of milk – it should form a sort of paste. Set the paste aside.

In a medium saucepan, whisk together the remaining milk, cream, sugar and salt. Add the vanilla extract and basil leaves to the mixture, and bring it to the boil. Don’t be surprised that the basil doesn’t turn your ice cream bright green!

Add the ricotta cheese to the mixture, mix well, and leave it to cool down.

By now, your tomatoes should be done roasting and have cooled down. So, puree them in a blender.

Once the milk mixture has cooled, strain it through a fine sieve into a large bowl. Make sure you use the back of your spoon to press the mixture down and get all of the basily juices from the mixture before you discard the leaves. Then, using the same sieve, strain your tomato puree into the bowl with the milk mixture so that the skin and seeds are left behind.

Cover the bowl with cling film and pop it in the fridge to chill overnight (or for at least two hours).

Once chilled, you’ll need to get your ice cream maker out and process the mixture according to the instructions, then transfer to the freezer. If you don’t have an ice cream maker, you can put the mixture into a plastic bowl and pop it in the freezer, taking out and stirring it once every couple of hours so that it doesn’t turn into a giant ice block. It will probably take six or more hours to set completely.

To serve, garnish with some sliced fresh cherry tomatoes and basil leaves. 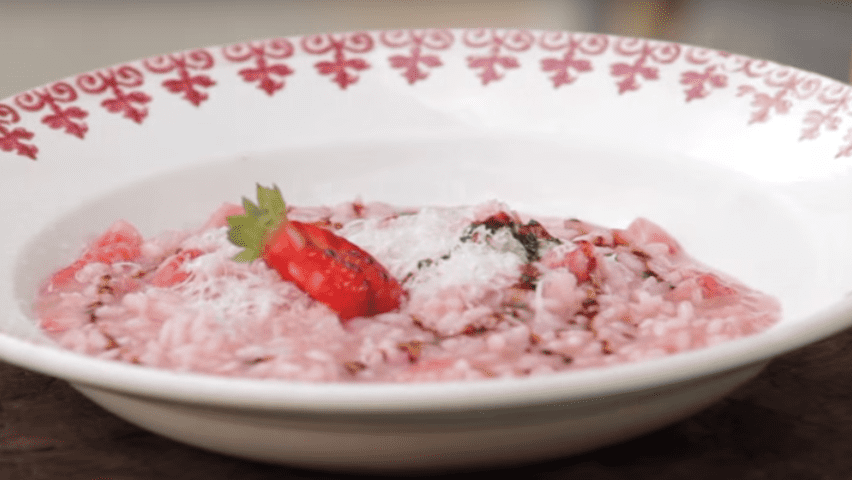 You may be thinking that a strawberry risotto is essentially a rice pudding. If you are, though, then you’re wrong. Sorry! This unusual meal is a savory dish! Strawberries and balsamic vinegar have become something of a foodie trend in recent years, so why not try this dish as an alternative to creamy strawberry-filled desserts?

What you’ll need (to serve two):

A knob of butter

A quarter of an onion, finely diced

Quarter of a glass of white wine

In a large frying pan, melt the butter. Add the onion and cook it until it’s soft and translucent, but not burnt or caramelised.

Sprinkle the uncooked rice in the pan, and stir it through with the onion well. Pour in the wine, and keep stirring so that the rice doesn’t stick to the pan.

Once the wine is almost evaporated, add the vegetable stock and leave it to cook for about 15-20 minutes, stirring occasionally. You’ll know when it’s done because the rice will be soft, with just a little bite.

Turn off the heat, and melt in a little more butter and the parmesan.

Give it a good stir, then leave it to rest for 1-3 minutes so the rice can absorb the last of the liquid.

To serve, heap a serving into a pasta dish and drizzle with a little balsamic vinegar. Buon appetito! 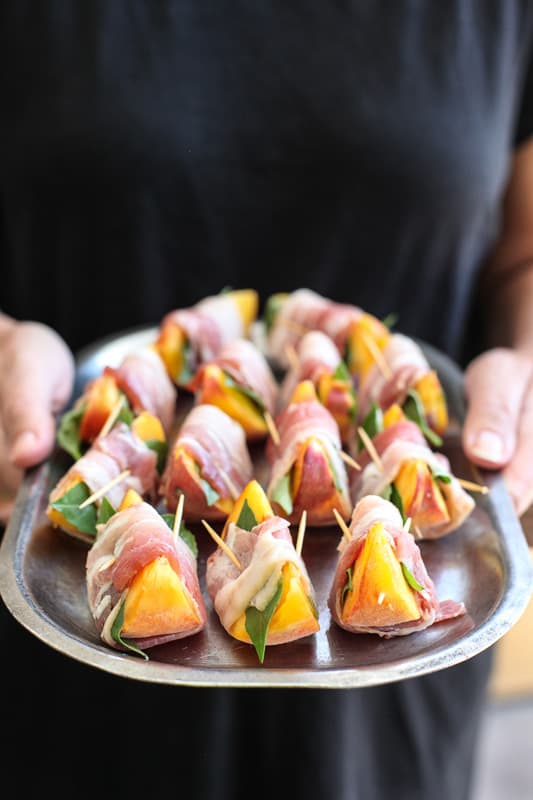 Bacon and peaches isn’t a flavour combination you’d jump to and think “yes, that will be delicious”, so it’s certainly one of the more unusual meals we’ve come across. But, it works! The sweetness of the peaches combined with salty, and even smoky bacon if you like, turns this little appetiser into a taste sensation! We recommend using standard bacon rather than thick cut to keep the flavour balance.

350g bacon – smoked or unsmoked as you prefer, each slice cut in half

A large bunch of basil leaves

Pre-heat your grill on a low heat setting, and brush the grates of your grill pan with a paper towel dabbed in oil.

Wash and dry the peaches, then cut each peach in half, and each half into quarters (so 8 pieces per peach).

Place one basil leaf on each side of each peach segment (try saying that three times fast…).

Take a half slice of bacon and wrap it around a slice of peach and basil leaves. Pin the loose ends of the bacon together with a toothpick. Repeat with the rest of the peaches.

Brush the bacon wrapped peaches in a little olive oil and arrange on your grill pan.

Grill the peaches until the bacon is cooked, turning occasionally so that all sides cook evenly. It should take about 20 minutes

Transfer to a serving platter, remove the toothpicks and drizzle with balsamic glaze to serve.

Crab and strawberry salad with lime by Food Network Canada 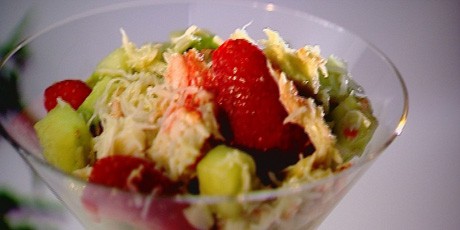 Strawberries as a savory get another outing in this unusual salad. Crab is just coming into season in June, making it more easily accessible and budget-friendly. When combined with summer strawberries, it’s a double whammy of seasonal goodness!

The juice of one lime

Cut the flesh of the avocado and the cucumber up into chunks about 1 centimeter in size.

Remove the stems from the strawberries, and cut the fruit in half lengthways.

Combine all ingredients in a bowl and carefully mix them together. Season with salt and pepper to taste.

How Big Is The UK Side Business Economy?